Our tango fame spreads to America 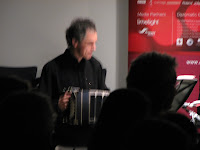 A couple of days ago I received an email from a radio station in Pennsylvania in the US asking for contacts with Australian tango orchestras and tango musicians - so they could put together a program on Australian tango music! How wonderful is that? It came via a tango contact in another state and TangoAustralia has been able to put the programmer in touch with 16 Australian tango orchestras/bands - we have 12 links on the website and there are a few more who don't have websites. So as soon as I know when the program will be broadcast we will announce it on this blog, on TangoAustralia and the other tango groups that we belong to - including the one we were recently invited to join in the US called Tango Connections. Tango Connections has been set up as a free access website for anyone interested in tango... handy if you are planning a trip to the US at any time.
1 comment
Read more

Last night - a stranger ignored and a gauche promotion

January 18, 2009
The Marrickville milonga run by Tango Entre Amigos started off quietly last night, but was buzzing by 9.30. It is a great floor - probably the biggest in Sydney - and the music by DJ Fabian is always good - last night it was excellent. Predictably it follows a pattern going from old to newer and back again, but that is far preferable to undanceable tango orchestras of the 1950s to 2000s - or Piazzolla written for the concert hall, that is played by some of Sydney's DJs. It started off slowly for me, not many dances until well into the night. As a woman who does not ask for a dance this is always a potential problem as I've mentioned before. Two things happened last night though. The first was a well-known Sydney dancer and teacher handing out fliers for his milonga, unasked for - and in fact handing them to people at my table, in front of me, knowing that his event conflicted with mine. Bad manners or just gauche? I prefer the latter as he probably had no idea. ( 10 days later
Post a Comment
Read more
More posts