Capital Tango - cold outside, warm inside 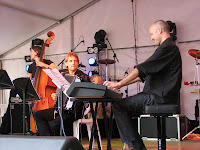 I spent the weekend with my partner and a few friends in Canberra. Apart from the 3 1/2 hour drive and the fact that Canberra goes round in circles and always looks like the entire town has gone on permanent vacation, it was a great weekend. As part of the National Multicultural Festival, Colectivo29, a tango band from Melbourne, were there to perform tango - which they did firstly at the open air concert in Garema Place and later at the Diamant Hotel (pictured at Garema Place) This band has a real feel for tango music and when they played the dancing classics they did it better than any Aussie band I have heard for a while. Like most they have a prediliction for Piazzolla, which when you want to dance is exasperating. The Saturday afternoon highlighted South American music and we were also treated the superb melodies of harpist Victor Valdez, a consummate musician I last heard at WOMADelaide in 2008. The Canberra tangueras and tangueros were warm and welcoming. The Saturday evening h
Post a Comment
Read more
More posts