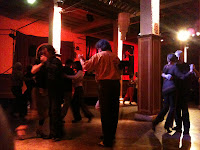 My first Spanish lesson in about 3 years - this morning. It is amazing how much you forget when you attempt to learn a language as an adult and then don't practise it. Of course there are words you don't forget but much that you do, particularly in my case the conjugation of verbs. I will do 10 hours of Spanish while I am here (part of my travel package) and hopefully find a way of maintaining it when I return to Oz, ready for my next visit.
The lesson was punctuated by huge noises of explosions. Common in BA it seems when there is a demonstration on, which seems to be at just about every corner. Rather frightening sound, but apparently harmless!?
Today was a beautiful sunny day in Buenos Aires - temperature between 10 and 21 deg. C so we took a long walk after the lesson and arrived back at our hotel with more CDs (no surprise) and another pair of shoes (not mine this time!)
I had decided to take a local's recommendation of a Spanish restaurant for tonight's meal - mistake no. 1. I am very fond of this person, but I now know that food is not something they know about. It was the worst meal I have had since school lunches! and closely resembled those amorphous plates that were frequently served in school canteens some decades ago. The flavour was similarly bland, salty and bore little resemblance to the way the food was described on the menu! The only up was the little glass of sherry offered at the start of the meal.
A taxi took us to La Garufa (picture) where 2 bands were playing - and I was particularly keen to hear Sexteto Milonguero. An interesting space half open to the outdoors, La Garufa has a high stage, concrete floor and tables around the floor. We arrived in time for the support act - Conjunto Falopa (a band of 4-5 guitars/ukeles and a singer) whose style reminded me of Caceres. Entertaining but not tango.
This meant we had a table when the milonga started...and it was interesting to watch the dancers - local and tourist. One is always nervous at a new milonga and I watched eagerly to see if I felt my stand was up to the locals. But I needn't have worried the standard was various - as it is in Australia - and it was a crowd of every age and stage (my favourite). Sadly we never got to hear the band. Walking across two barrios of this big city does not prepare one for a late night and by 1 am I was falling asleep - still no sign of the music. So my critique of Sexteto Milonguero will have to wait for another time.
La Garufa Sexteto Milonguero Spanish lessons