April 16, 2010
Our last day in Buenos Aires and the last Spanish conversation for now... (must get back into when I return, I am just beginning to remember so much of it!) It rained for the first time this trip... and we escaped 2 attempts at having our pockets picked. One in busy Florida when I felt my backpack being touched and whipped round with a plastic bag in hand, knocking the person behind who feigned surprise and then disappeared. Now I know you shouldn't wear backpacks in busy shopping malls so I have been mostly wearing it on my front in this situation... thank goodness I was on my guard this time. The next time was on the Subte (the underground train) which we caught because of the rain. A group of business looking types in their 40s were standing near us and when my partner and I didn't get on the first crowded train neither did they. When we got on the second train they pushed and shoved - even though there were only half a dozen people getting on. My partner had his hand on his wallet as he had just decided not to get it out and I had my backpack on my front... they didn't succeed, though another passenger asked if we had been robbed when the potential thieves jumped off the train before it left the station!!
Last time we were in B.A. 2 friends were robbed... we are glad that this time we were not robbed twice!!
Our last meal was at Brasserie Petanque, in San Telmo. A delightful French brasserie serving French food, including Boeuf Bourgignon, Creme Caramel and French Onion Soup. You'll find it on Defensa - which still has the farole lights and cobblestones. 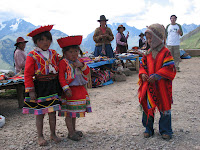 Next morning was a horribly early start to catch the plane to Lima, then onto Cusco. Most of the day was spent travelling - and we arrived at Yucay and the extremely comfortable and well-appointed Sonestas Posadas Del Inca in time for a rest, a Pisco sour and an early dinner. Most of us were feeling so tired we weren't sure whether we were suffering altitude sickness or just in need of a good night's sleep.
Brasserie Petanque Buenos Aires Lima Peru pick pockets

Shayne said…
Me again. Why doesn't anyone else comment? I seem to be the only big mouth.

Obviously, people are reading the blog.

Anyway, it's a great read. Your experience of nearly being robbed is a lesson for all travellers - no matter where they are in the world.

tangocherie said…
Angelina, sorry not to have seen more of you here! Come back soon!