It's three days since I've written! We arrived in Cuzco, travelled to our hotel in Yucay - did our best to acclimatise and set off next day for the Inca sites of Moray - where archeaologists have unearthed huge rings of horticultural terraces, used by the Incas to test the climate tolerance of plants; the salt mines at Maras - once again a huge terraced slope this time of salt pans and Ollantaytambo (pictured) - the mind-boggling Inca kingdom of the Emperor Pachacuti. I can't do justice to the Inca empire in this blog - suffice it to say that they have to be seen to be believed, the Incas had a great understanding of the natural world and engineering. The highlight of the trip for every traveller is of course Machu Picchu.
We devote 2 days to travelling to Agua Calientes, the town that feeds tourists up to the site, and set off early by bus to the rail depot at Ollaytaytambo. Seven years ago when I previously visited Machu Picchu one caught the train directly from Cuzco and it took 3 hours. Even before the huge floods early this year (2010) Peru rail had moved the depot to Ollaytaytambo, but now one must take a long bumpy bus ride to the train depot further down the track to catch the train. Quite arduous and not as much fun, but it becomes very apparent why when travelling on the bus, the railway line suddenly disappears into a chasm in the river bank!

Our first day at Machu Picchu it rains - but for all of us, even those who have been before it is magical - and we have an excellent guide. The llamas oblige with a photograph and we learn much about this site, which was a summer retreat for the Inca kings and nobility.

Our hotel is the best in town, the Inkaterra Pueblo. It is an eco-centre and everything from the accommodation to the food are world class. We down another Pisco Sour (gratis) and discuss the next day. Most of the party decide to return to Machu Picchu and explore some of the parts that are not on the regular tour trail. The sun shines this time and we find the colourful local orchids clinging to the sides of

the stupendous mountain cliffs over the Inca trails, awesome. One of our party was heard to say that exploring Machu Picchu was better than tango!
At day's end, we take the train back to the bus depot and the long road journey back to Pisac. Today is a day of rest. We will explore Urubamba - and get ready for Cuzco tomorrow! 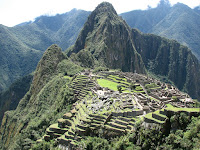