Tango at Gladesville & at the Victoria Room - wow

May 24, 2010
It was warm inside on Saturday at Gladesville, but outside the rain and wind meant winter had really arrived, so it was fantastic to see a crowd at Gladesville - and it was a great night. As a DJ I always worry that I will not please most of the crowd - I know there is always room for improvement, but it makes it all worthwhile when people let me know they liked it! We had a birthday dance (pictured), a cake and alfajores - and lots of dancing. 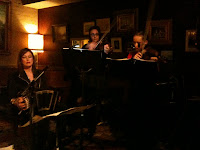 Then the next night we made our way through the cold and rain to The Victoria Room in Kings Cross where Fuego Blanco were playing. This band is a group of virtuosic young musicians from Sydney's Conservatorium and SYO, led by bandeonista Maggie Ferguson. I have been following them since they were first formed and they are now among the best - the Argentinian ambassador confided to me that he is very proud of them! They played 2 sets of tangos, vals and milongas brilliantly. 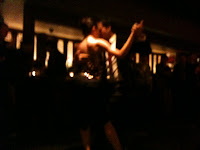 In between Sydney dancers Belen Silva and Sonny Huy performed a beautiful tango and a waltz. Belen has recently moved to Sydney, from her home in Buenos Aires, and was among the teachers and performers at the recent TangoFest in Sydney.
And there was dancing for everyone. A good crowd of tangueros turned up and danced to the band and the DJ's music - calling for an encore at the end of the band's performance - and asking when the Victoria Room was going to do tango again.
Shortly the band is off to Buenos Aires to study tango in its home, so we can expect even greater things when they return - and let's hope that the elegant Victoria Room becomes a regular tango venue in Sydney! It is certainly the classiest.
Belen Silva Fuego Blanco Maggie Ferguson Sonny Huy Tango Gladesville Tango Victoria Room

Shayne said…
It's lovely to see Gladesville getting a plug - a little piece of paradise squished between poshy Hunters Hill and the sprawling western suburbs.

Angelina Tanguera said…
Yep - there's more to Gladesville than the RSL but unless you live there how do you know?? Birthday - one of our regulars who prefers to remain anonymous!
Friday, May 28, 2010 at 1:51:00 PM GMT+10