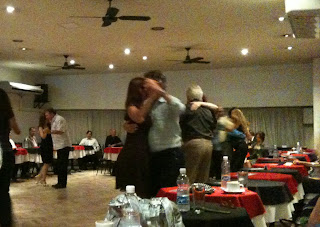 Many Sydneysiders will know Tony - he who moved to Buenos Aires about 18 months ago - and they will also know of his dedication and love of tango. When I was in Buenos Aires in April I met up with him - and met Cherie for the first time. It was wonderful to have friends in tango in Buenos Aires and it really made our stay. We had some wonderful nights at the traditional milongas.
Recently Tony has been visiting Europe, including Berlin and yesterday Cherie posted a letter on her blog by Tony about the Tango Festival in Berlin - and Tony's immense disappointment at the fact that is was taken over by people mindlessly dancing nuevo...with no respect for the space of others. (Go to Cherie's blog to read the entire letter Tony wrote to the organisers).
Both Tony and Cherie make the point that Festivals should be marketed so that delegates know what to expect. In Sydney we have the Sydney Salon Tango Festival coming up in September with Javier Rodriguez as the leading draw card... so here is one that is being promoted as being about a particular style of dancing tango!
The picture: Tony dancing at Maipu 444 in April this year.
Sydney Tango Festival Tango Cherie Tango Festival Berlin Tony traditional milongas