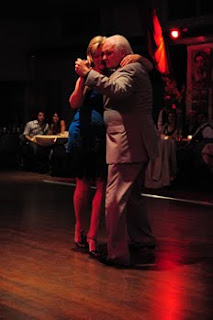 An enterprising couple, John and Cheryl Lowry, in Brisbane (capital of Queensland for those who are not Aussies) set up a charity for children in Argentina some years back and have been raising money through milongas around Australia. Their milongas are always very well organised and the raffles are lots of fun....John has just written to let me know of a Milonga Para Los Ninos to be held in Buenos Aires on July 30... so if you are in Buenos Aires... here are the details. "It’s a pleasure for me to let you know that Milonga para los Niños, an initiative born in Brisbane, Australia, http://www.paralosninos.net/ will have a place in Buenos Aires, on July 30th at La Milonguita . Since 2002 a group of Australian Tango lovers has been organizing in Brisbane on the last week of July, La Milonga para los Niños, to get funds for poor children in  Argentina and South America through a net all over the world. El Hogar Los Horneros at La Reja, in Buenos Aires Province , will receive th
Post a Comment
Read more
More posts