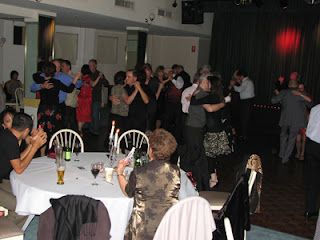 For a while there it looked like the tango scene in Sydney would keep on growing - new people came and more left than stayed but those who got hooked just couldn't stay away and became part of the scene. But this year it seems that the tango scene has gone rather quiet… some might even say stale. Few new people have come along and if they are women they will frequently go back where they came from when they find how difficult it is to get a dance at a milonga where there are many more women than men. Or worse they find themselves sitting out at a milonga where even the man they have been learning from does not dance with them.
The arrival of new babies, the break up of partnerships and the disillusionment of one partner with tango have all taken their toll.
As with any activity in Sydney cliques have evolved. Frequently these are people who learn from one tango school and stick together at milongas as well as in class. These groups sit together, dance together and socialise - and rarely mingle with others. Some give out the vibe that they consider themselves to be the upper echelon, but others obviously stick together simply because they like each other's company.
Sadly these cliques create barriers and this drives newcomers away. You have to work very hard to be accepted into an already established clique.
I don't have an answer. But I did notice these divisions during the Sydney Tango Salon Festival and I am sad that the demarcation often appears to be so rigid.  It would be lovely if all the schools got together and did one big milonga is something I frequently hear - but this will never happen. If it did maybe it would go some way towards homogenising the scene.

Anonymous said…
Some of us stick together because we are shy or because we are tired of rejection and don't want to have to deal with it again.
Sunday, December 25, 2011 at 6:36:00 AM GMT+11