Arica to Arequipa: we travel to Peru

March 29, 2012
Being beside the sea in Arica was invigorating - our hotel was right on the water's edge and the crashing of the surf at night is something I have always loved. But it was time to explore again. 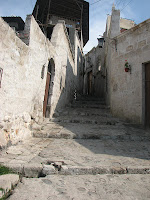 None in our small party was keen to spend another day on the road travelling through the desert but we were all looking forward to Arequipa. Our bus was late because of the danger of land mines! Pretty serious reason. The Chileans laid many land mines half a century ago in their fight with the Peruvians over land on the border. It was believed they had all been found until recent unusual rains exposed two - one on land and one that floated down to the sea and so there has been a serious search to find any more. The border was shut and our bus was coming from Peru. So when we finally did go through the long process of checking out of Chile and into Peru we couldn't help but feel a little apprehensive. 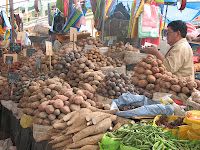 The desert in this part of world is like an endless moonscape and makes you aware just how resourceful and tough the early inhabitants must have been. At times the drive was pretty hairy as the Peruvians played cat and mouse on a 2-lane highway  that twisted it's way through the Andes.
Our arrival at our superbly comfortable accommodation in a hotel that was once a large house in the heart of Arequipa was late.
Today we explored. Arequipa is the second largest city in Peru and since our last visit 6 years ago, the population has increased to around 1.2 million and prospered - and with prosperity has come a huge increase traffic and pollution - there are 40,000 taxis!! 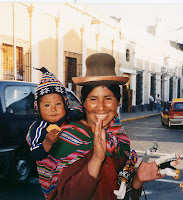 Arequipa is a truly picturesque city and the Inca terraces on the outskirts are an important part of its history. We visited an old palace and the local markets (picture shows one of the potato sellers)  and lunched in a picanteria. Picanterias are local restaurants that feature local produce and we enjoyed the local prawns, ceviche,  fried fish and a risotto sitting under a pergola in what felt like a back garden. A pigeon joined us making a noise like a frog! which is what we thought it was until we asked. After lunch we visited the beautiful Santa Catalina monastery. This is a huge complex in the heart of the city that takes up about 3 city blocks and houses just 30 nuns - with the rest of the complex open as a museum. It was originally built at the end of the 16th century and was the home of an order of cloistered nuns. It is possible to visit the cells that were home to the nuns, to walk the streets of their little town and to try to understand the sort of hard, religious life they led.
Tomorrow we set off to Colca Canyon in search of condors - so it is an early night for me.
(no pics of Santa Catalina at this stage - they are on my iphone, not my camera).