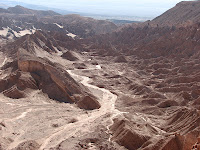 We've left Buenos Aires behind and on our first full day staying in the Atacama desert we started the day with a visit to the Moon Valley (Valle de Luna). Moon Valley is aptly named - it is a surreal landscape of rock, clay and salt pans. Huge mountains shaped like the spine of a stegosaurus, folded like the pleats of a kilt or precariously balanced boulders form this environment. A harsh environment where very little lives - an occasional butterfly fluttered by - it has a strange beauty. The village of San Pedro where we are staying is situated in one of the oases that make it possible for humans to live here - and for the huge copper mines to function. 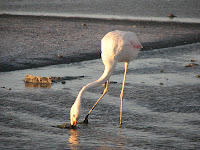 In the late afternoon we travelled to the Atacama Salt Flat. It is possible to hike, horse-ride and bicycle in this environment, but it is incredibly hot and our choice has been to go by car. This trip took us briefly to the village of Tocanoa, which has recently been inundated by a flood! that swept away a number of houses and silted up the river; then on to the National Flamingo Reserve. The lakes here are home to a number of bird species including 3 types of flamingo. We walked the paths that had been pushed into the lumps of hard salty clay and photographed the exotic pink birds as the sun set. 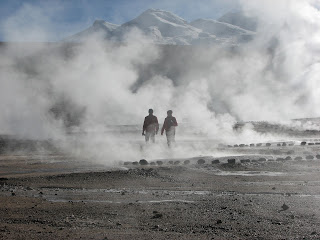 It was a late dinner and and early start today (Friday) - we had to get up at 5.00 in order to get to the El Taito Geysers at sunrise. High in the Andes, these geysers are at an altitude of 4,300 metres - about 2,000 metres than our current location. This a geothermal field where huge steam columns known as fumaroles rise, together with the geysers. It was minus 3 degrees Celsius! So even though we were all rugged up in our fleecies and beanies it was a shock to the system early in the morning - but well worth the early rise. We photographed each other, the geysers and fumaroles and the spectacular scenery - then the vicunas wandered into view. Smaller than llamas they live in this icy world in herds eating the stubby little bushes that look like rosemary.
After breakfast provided by the trip organisers we travelled back to our hotel, via the village of Machuca where the llamas, that are the basis of the villagers' livelihoods watched us intently as we photographed. They really are very beautiful creatures and their big brown eyes seem to say they know more than they are letting on!
This afternoon we have opted to lounge round the hotel's swimming pool and catch up on emails, photo filing - and writing because tomorrow we head off across the desert to Arica - 11 hours by car.