The driest place in the world and an amazing village

March 27, 2012
Driving across the Atacama Desert is the type of trip you only want to do once in a lifetime - unless you love deserts, which I don't. I have never driven across the Australian desert, but it is not on my wish list - now I have driven across the driest desert in the world. It is so dry that there are no glaciers even on mountains that are around 7,000 metres!! And it is seemingly endless. 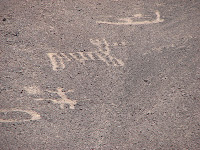 We left San Pedro early in the morning as the sun rose and headed across the desert to C and then north towards our destination of Arica. What was planned as an 11 hour drive ended up being about 14 hours because of stops to see geoglyphs (large designs made of stone and drawn on the sides of mountains and hillsides as 'signposts' to ancient travellers and traders) and to visit the absolutely fascinating town of Humberstone - which made watching desert go by for hours on end, fascinating.
I love history - especially social history - and this ghost town is in an amazing state of preservation and presents a very vivid picture of what life must have been like living in a mining town over 150 years ago. 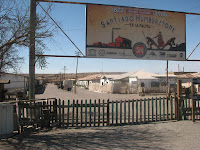 James Humberstone founded a mining town to extract saltpetre (sodium nitrate) from the desert ground in 1872. Built along the lines of an English village, it only resembles one physically. Workers were brought from surrounding Peru and Bolivia as well as Chile under a system of indentured labour that gave them no escape. The work must have been hard - and certainly the conditions were brutal. A strike in the nearby town of Iqueque in 1907 led to the massacre of hundreds of the thousands who had made their way to a point where they were demanding better pay and conditions.
Today you enter the village, which is listed on the UNESCO List of World Heritage in Danger, by the houses of the lowest of the workers next to the Pan American highway. Having spent a day travelling through the dust, heat and utter barrenness of the desert coming to a town that resembled an English village was surreal. The single men's quarters were two very rudimentary rooms which now display toys, household equipment, tools and items of daily life that have been retrieved from the  houses. The town was abandoned in the early 1960s and was vandalised but enough remained so that when it was  declared a World Heritage Site in 2005 it was possible to start to put it back together.
Around 2,000 to 3,000 people lived in the village. There was a town square, a market, a bandstand, a fire brigade, a hotel with the most amazing swimming pool made from the hull of a shipwreck situated behind, and a huge wooden theatre. Mostly built of wood (brought back in the ships that took the sodium nitrate away) the houses go from rudimentary to 4 bedroom houses with indoor bathrooms and maid's quarters for the upper echelon.
And then there's the mining equipment. Huge piles of tailings or overburden rise behind the village school next to which are the remains of the processing plants and the huge machines that were used to grind and process the rock.
Our group explored for about 2 hours, and left reluctantly. We had to head off and onwards and didn't arrive in Arica until almost 10pm. A long, long road. 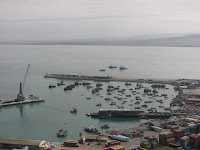 Next 2 days (Sunday and Monday) we spent exploring the city. Our hotel is situated right on the beach (we all thought about tsunamis when we saw how close, as we are in earthquake region). It is wonderful to hear the crashing of the Pacific ocean at night - and to breath the salty sea air. Arica has an interesting history having been a battleground between Chile and Peru, a fishing port (very smelly up one end in the afternoon) and being situated so close to such arid land. One of the most interesting attractions is the archaeological museum that contains mummies that have been unearthed in excavations of the city and surrounding countryside. Dating back thousands of years the mummies are presented in an excellent display and I can now say that my knowledge of mummification is greatly improved!
Tomorrow we are off again - up the highway and into Peru and beautiful mountain town of Arequipa.