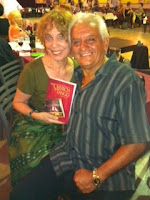 Slow postings... my apologies, but I seem to be in an internet fog at the moment and am finding it really difficult to get online much of the time!

Jet lag can make it difficult to get the most our of your holiday - and on Friday it really got the better of me. I slept really badly on Thursday night - though I did get a fair bit of my book read in the wee small hours of the morning.
We walked to the Japanese garden, next to the Zoo in Recoleta on another beautiful sunny autumn morning. The Japanese garden is a delightful oasis, though it is situated with busy roads all around - so that makes it less tranquil than it could be. The central attraction is a huge lake with a path which wends it way round and Japanese maples, conifers, other typical plantings and Japanese furniture along side. We lunched in the Japanese restaurant in the gardens - which felt rather incongruous, eating Japanese in Argentina. It was not of the standard we are used to at home, but it was reasonable. The white fish in the sushi was not named and was rather rubbery and unidentifiable for example. The day grew steadily hotter, as it has in the days since we've been here. We left the gardens and walked towards Malba, the Musuem of Latin American Art in Buenos Aires. Fatigue got the better of me and after a brief walk round the Museum we decided to return to our hotel. On the way we found a fabulous pastry shop near the Scalabrini Ortiz subte, Cafe de Botanico. It was a cornucopia of fabulous looking pastries and cakes and was packed with locals enjoying these with their coffee. We should have stayed, but instead we purchased a couple of pastries - which were delicious! - and pies for later and headed back for a much-needed siesta.
Our milonga for this evening was to be Los Consagradas, which is situated in the building where Nino Bien is also held. One of BA's fabulous buildings with a huge wooden floor, up a set of broad marble stairs. This was the first ever milonga venue I went to in BA, way back in 2003 when we were visiting for the World Tango Festival, and did a tour of many of the most popular milongas. We joined our friends Cherie and Ruben and caught up with a few Aussies who were sitting with them. Cherie has a few copies of her book, The Church of Tango, which quickly sold. (see the ad on the side of the blog for where you can purchase a copy). The milonga was not overcrowded, as was Club Gricel and we had an excellent table next to the floor. We are couples, which means the women will have more difficultu getting dances with locals, but we had decided that we would all sit together anyway. It was a lovely evening, we all danced with each other and I really enjoyed the Paso Doble with Ruben! - I didn't even know I could dance the Paso Doble, a sure sign of a very good leader.
Japanese garden Buenos Aires Los Consagrados Ruben and Cherie