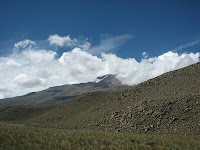 Our bus and driver arrived early for the drive to Colca Canyon where we would overnight before a very early start to drive to the viewing place in the hope of seeing the mighty condor. On our previous trips to Peru we had missed this trip because it is not easy to get to. The sun shone as we drove through the honking, haphazard traffic that still frightens and amazes us and into the rolling hills of the Andes. The drive would take us to around 5,000 metres above sea level so we seriously chewed on Coco and Maca sweets and drank heaps of water in the hope of avoiding altitude sickness. You never know when this complaint will strike.  This is my third trip to the Andes, I experienced nothing the first time - though we did start in Arequipa, drink lots of Mate and take it easy; the second time I felt quite ill by the time we got to Urubamba; this time I experienced it slightly when we up around the 4,200 mark to see the El Tatio Geysers...so I was taking all the precautions I could.
The road is thick with huge trucks taking produce and goods to the villages on the way and tourist buses - heading our way. As we came into the wide open spaces of the National Park we spotted our first wild vicuna. Graceful and deer-like these animals live in herds and are prized for their fine wool. But they are protected so the shearing is done under control - hence the wool is the most expensive. We passed children shepherding their llamas and stopped to buy some gloves from a young 14 year old who had a baby llama with her - so of course we took photos too. 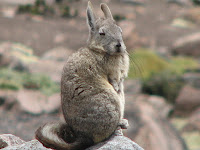 As we climbed to the highest point we spotted four vizcacha (alpine rabbits with long tails) sitting on the rocks. Lunch was on the other side in a tourist restaurant in Chivay, where some of us ate our first alpaca (trying not to think of their soft brown eyes).
A trip to the markets in Chivay was a chance to see the local community
We arrived at our lodge on the edge of a raging river in time for a little relaxation (I opted for a massage, others for a walk) before an early dinner. 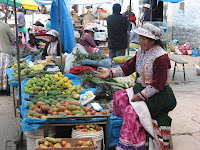 Five o'clock starts are my least favourite part of travelling (apart from sitting around in airports) and we had another one. But it had been raining in the night and it was still coming down - would the condors get the thermal currents they need in order to fly for the tourists in the canyon? Our guide advised us that it would be some time before the cloud lifted and that we would visit some villages on the way to fill in time. However we only made it as far as the first. As the rain set in we got the news that the road was blocked ahead of us by a truck that was stuck. There was a grader trying to build another road but this would take at least an hour - and then there was no guarantee. We figured that in guide-speak this could be at least 2 hours and that standing in the mud under a dripping hay porch was not going to be fun. As one of our party remarked - 'if we were 20 we'd think this was an adventure'  - but we aren't and we didn't and we decided that it was all too chancy - we would forgo the condors and travel back to Arequipa. 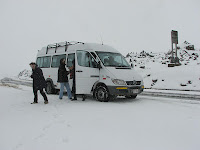 Our driver had remarked that there could be snow on the road and how right he was. As we climbed back up the Andes it began to sleet, then to snow - heavily. The ground was covered before we knew it and the road was slowly disappearing in front of us. Of course we stopped - took photos, threw one or two snowballs, tromped around in the crisp freshness of it and then drove on - back to Arequipa, a delightful picnic lunch overlooking some of the Inca terraces and an afternoon back in one of Peru's most delightful cities.
Andes condor condor colca canyon vicuna vizcacha