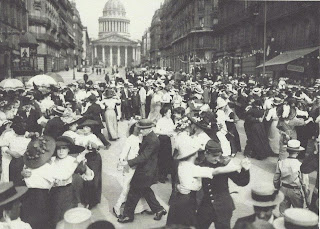 Dancing tango in BA in 1913 - notice the same sex couples!!  DANCING AT FITZROY TOWN HALL Tango historian Christine Denniston has described 1913 as the year that tango took the world by storm.  The photo on left was taken in Buenos Aires in that year. Around the world there have been celebrations of 100 years of tango so on Saturday 17 August, Melbourne’s tango schools presented Milonga100. Fitzroy Town Hall Things haven't change a great deal ... here  is a report of the evening based on the article from Melbourne’s Argus newspaper of 22 December 1913 when the Palais de Danse in Fitzroy was first opened. This magnificent dance palace was built by two American brothers, named Phillips in 1913, one year after Luna Park. It only lasted until after the First World War. Dancing was the chief attraction at Fitzroy on Saturday night. The heritage Italianate blue stone town hall was once again turned into a dance palace to celebrate 100 years of Argentine tango in Me
Post a Comment
Read more
More posts