Milonga attendances down - where to now Sydney? 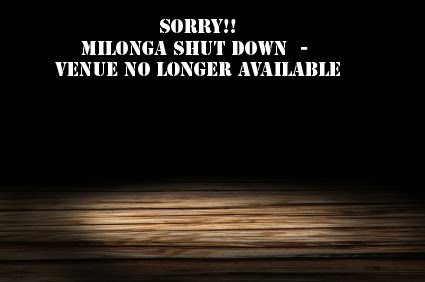 A fellow blogger wrote recently that the number of events across Europe has increased the competition, and it's noticeable how quiet weekend milongas ...can be. She/he could be writing about Australia, or Sydney in particular, they are actually writing about Tango Encuentros in Europe taking dancers away from local events. in London (I plan to write about encuentros and the Sydney tango community in a later post).
The main 'threat' to the long-established milongas in Sydney is different it comes rom within.
Our weekend milongas have always been organised by the large tango schools and originally there was an 'understanding' that a certain Saturday belonged to a certain school. However we soon ran out of Saturdays, obviously enough, and so weekday nights and Sunday afternoons became the time slots together with a choice of events on most Saturdays. Now these have all been 'taken' and we are finding that on many week nights there are more milongas than there are on the weekends and I am wondering just where this is leading. There will come a point where events have to close down (as some already have) because of costs and low numbers.
Last week we had 4 milongas on Tuesday night - 2 of them within walking distance of each other. Next Friday we have a similar situation (4 milongas) though not so close together. The newer milongas will draw the dancers, just because they are new  and the older ones will suffer.
One of the milongas on Friday is our very first milonga. Held in Glebe Town Hall it began around 15 years ago and was a weekly tango fix for many for a number of years. It is now fortnightly (thanks to the venue not the organisers) and it has hardly changed in other ways, which probably doesn't help it. And frequently it has very low numbers. This makes it a labour of love for the organisers whose venue costs, insurance, APRA fees, equipment and DJ costs are the same no matter how many turn up. The cost of venues in Sydney is rising, which together with the gradual disappearance of venues with dance floors as they get swallowed up under poker machines, carpet, restaurants and even offices, makes finding a suitable dance floor more and more difficult.
If the low numbers consists of more women than men this makes it even more problematical.. some women get few or no dances and of these women some will drop out.
Sydney's tango population is not growing, it is my observation that it is level-pegging. New people are coming in, though not in the numbers they used to, but long-time dancers are dropping out.
So it seems we are suffering from much the same problems as the tango scene in other parts of the world. It will be interesting, and exciting I hope, to see how the tango dancers and organisers cope and whether we see the type of venue used for tango events change and more of the original Buenos Aires style milongas disappear from the Sydney scene.