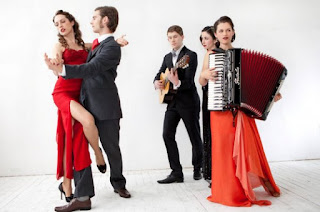 We haven't heard from Sydney tango band  Tángalo  since their sell-out tour with the virtuosic Duo Ramirez-Satorre in February this year (2015) so I am excited to learn that they have a program planned for the Spring.   Tángalo  are professional musicians who fell in love with tango and combined their passion for the music with a love of the dance to produce music for our milongas. We have watched them mature over the last few years, until in February their collaboration with the duo they had spent 3 months studying with in Buenos Aires treated us to performances that were breathtaking. At the same time Emily-Rose debuted as a performer on the b andoneón, adding to the band's sophistication.  Rave reviews of this tour from eminent critics such as the Sydney Morning Herald's John Shand  following on from their performances at the National Folk Festivals in Canberra and the Successful 2013  Made in Argentina Festival,  have built their reputation.  Here is the program ju
Post a Comment
Read more
More posts