Dance to an orchestra from Buenos Aires in Sydney 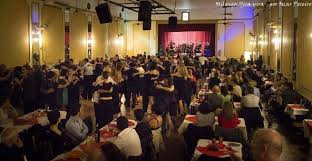 Yes you can... on Sunday night 1st October at the Marrickville Town Hall. The Australian Tango Festival Orchestra will play and if you close your eyes you will feel as though you are in one of the famous tango halls, such as Salon Canning.
The sounds of The Australian Tango Festival Orchestra are equal to none. Their arrangements based on the arrangements of the greats, D'Arienzo, Pugliese, Calo, Di Sarli.... are as authentic as you can expect to hear from a live orchestra, and their passion is equal to none.
I have just come from the concert of the orchestra held at the Mosman Art Gallery here in Sydney as part of the Australian Tango Festival and I was blown away. An increased repertoire, clever new arrangements, superb synchronicity and top musicianship make this music a one-off that you won't want to miss - and you will want to dance to! Consisting of musicians from the orchestra, Tangalo, Orquesta La Luna and Mendoza, this band has 4 bandoneons, which enables them to bring to life the sounds of the Golden Era. If you are in Sydney this long weekend... don't miss them, there is only one more opportunity!!
Australian Tango Festival Orchestra