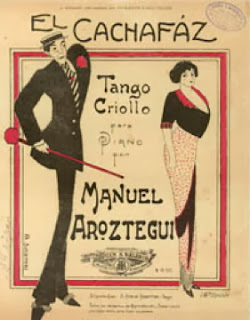 The Old Guard period of tango began at the turn of the 19th century and really gained momentum just before the First World War. The music has been put into periods by some, including Horacio Ferrer in his book 'The Golden Age of Tango'.
Ferrer breaks tango music into the following eras:
1889-1895 The genesis.
1895-1910 The Guardia Vieja period 1. The dance is evolving, the bandoneon appears in bands, pioneers go to Paris and records appear
1910-1925 The Guardia Vieja period 2. Tango becomes known world wide, pianos appear in orchestras, tango songs appear, sextets are formed and stage tango appears.
1925-1940 The Guardia Nueva period 1. Orchestras evolve, tango is played on radio and features in films, milongas begin, singers perform with oerchestras.
1940-1955 The Guardia Nueva period 2. The poetry of the tango excels, more orchestras form and reform with singers, clubs have huge tango dances, jazz discovers tango, tango goes to Japan, tango LPs appear.
1955-1970 the Avant-garde period. Tango is repressed in the dance halls of Argentina by the military regime.  Tango of the 40s and 50s goes to Europe, large orchestras decline, tango appears on TV.
1970-1985 The Contemporary Period. Stage tango evolves, tango is created in Europe and big productions appear. Tango is written for classical orchestras.
1985 to 2000. Tango is Resurrected.  After the fall of military junta in 1983, tango reappears and classes and teachers arise to meet the demand. Styles evolved and were labelled... milonguero, nuevo, salon...
A thoroughly researched and well-written history of tango, written by Christine Denniston can be found on her website.

The music that I love to dance to is the music of the fabulous orchestras of the Golden Age - Biagi, Calo, Canaro, Demare, D’Arienzo, Di Sarli, Troilo...but sadly many of the recordings are very scratchy and clouded by poor copying. Today’s technology allows for remastering and there are now many wonderful ‘clean’ copies of these greats sounding as they would to the Tangueros of the time when they were playing the dance halls of Buenos Aires.
Tinkering with recordings of the Golden Age by increasing the bass or changing the pitch does not improve the musical experience. Rather, as I found on the weekend at a popular milonga, it creates a thumping beat, that drowns the vocals and the melody - and gave me a thumping headache! I wasn’t the only one. When I retreated from the dance floor I found a group huddled in the foyer also escaping the DJ’s attack on the music.
Those who are new to tango (and this DJ is relatively new) sometimes find they need to increase the bass so they can follow…
Read more